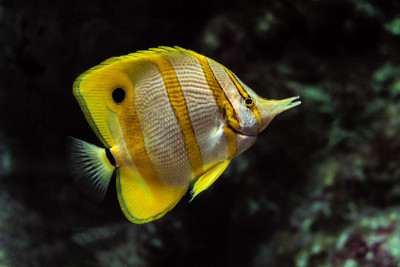 Quick Navigation
So, are Copperband Butterflyfish Reef Safe?
What Is Their Scientific Name?
What Other Names Do They Have (Common Names)?
What Does The Copperband Butterflyfish Look Like?
What Is Its Natural Habitat?
What Do They Eat?
What Is Their Behaviour Like?
Why Have They Got A Bad Survival Record In Home Aquariums?
Why Do They Jump?
Can They Get Damaged While They Are Shipped And Handled?
Conclusion

So, are Copperband Butterflyfish Reef Safe?

The short answer is yes, however, to achieve this you need to do some work to keep them happy, which I will explain in detail in this article.

First of all, this specie, like any other reef fish for that matter, exhibits considerable individuality in terms of feeding habits. Some of them may not even try to find out how the corals taste, some others might do, according to reefsmagazine.

Your fish might prefer nibbling on the pest anemones, or it might prefer snacking the corals, who knows. As I mentioned earlier, whether or not your Butterflyfish is reef safe depends on several factors that you can control quite easily.

For example, if your tank is poorly decorated in terms of corals and littered with pest anemones, your fish may not be happy. However, it will be a good indication, if you notice it nibbling on the corals in the tank.

Provided that you own an adequately spacious aquarium with the right filtration, lighting and aquascaping guidelines are being followed, you have no reason to worry about your fish.

Even if initially your fish shows a preference for the corals and not the food you are providing, don’t give up. You must offer a bigger variety of food sources. Sooner or later, the right food will be found and your fish will stop taking bites off the corals.

What Is Their Scientific Name?

The Copperband Butterflyfish belongs to a family of fishes that all look like perches, the Chaetodontidae family.

This family includes 12 different genera and over 130 species. The name of the family is derived from two Greek words; chaete, according to fishbase, which means hair and odous (genitive: odontos), which means tooth.

The Copperband Butterflyfish's official species-name is Chelmonrostratus. If you are interested in researching more on this superb fish, you should keep in mind that there has been a change in its taxonomic genus-name.

In the past, they were referred to as Chaetodon rostratus, according to animal-world.  So, this should not cause any confusion. Whether you are reading something about the one or the other, it is all about the same fish. Let’s not say more about the etymology of the species name or names and move on with the common names of it, which I suppose are of more interest to us.

What Other Names Do They Have (Common Names)?

As one would expect, all the common names used to refer to this reef coral fish are basically successful descriptions of the way it looks like and it will all begin to make sense to you onceyou have read the answer to our next question.

As mentioned already, all the fishes belonging to this certain family share some main features that allow us to call them percomorphs, or to make it simpler, they remind us of the perch.

That is, Copperband Butterfly fishes have bodies that are compressed as well as elongated small snouts and bristle-like teeth. The small long snout allows them to go after their feed, which is hidden in small holes of the coral reef. Their colors are very striking; orange or copper stripes, with a black lining, on a silver or whitish background.

The body stripes are five in number and become progressively wider as we move from the head of the fish to its tail. An extra copper stripe runs along the front side of its snout.

On the dorsal fin there is a pseudo-eye, which is basically a black spot resembling an eye, surrounded by a white-blue lining, according to ​seaunseen.

The overall appearance of the Copperband Butterflyfish reminds that of the angelfishes, although there are significant morphological differences. The younger individuals have the same morphological characteristics with the adults.In terms of size, they can grow up to 8 inches although in captivity they rarely reach such sizes.

What Is Its Natural Habitat?

Copperband Butterflyfishes are characteristic coral reef species. They can be found living on coral reefs of the tropical waters of the Pacific and the Indian ocean.

Their geographic presence is thus quite widespread, ranging from waters between India and the Papua New Guinea, from Japan to North Australia, and they even inhabit waters around Madagascar and the Eastern African continent in general.

Their natural home is the reef and they always keep swimming close to the corals, at a constant movement of getting in and out small crevices or holes of the reef.

Since they hunt during the day, at night they nest into small openings formed on the reef. They prefer coastal reefs that are no deeper than 25 meters.

What Do They Eat?

In the wild, Copperband Butterflyfishes feed on benthic invertebrates. These are small spineless species found on the bottom of the sea bed. They have a preference also for tubeworms and even small crustaceans.

Although their diet is comprised mainly of animals, they also feed on sea plant species. In short, they are omnivores, eating everything. They owe their unique hunting and probing skills to their slender bodies and long beaks that allow them to squeeze themselves into small crevices on the reef, where other fishes cannot hunt.

This reduces considerably the competition over food and favors their growth and survival. In captivity, the Copperband Butterfly can be fed with a variety of food sources, such as tablets, flakes, or pellets, but also with shrimps as well as worms and other live foods.

One solid piece of advice when buying a Copperband Butterflyfish is to carefully observe its behavior in the pet shop’s fish tank and make sure that you are preparing to buy an individual that is active at feeding.

Once in our home’s fish-tank, they need to be fed several times daily while they are getting used to their new environment and we should consider providing them with a variety of food sources.

Once they get used to their new environment, you can reduce the feeding frequency, to 2-4 feedings per day, depending whether you are feeding a juvenile or an adult. And don’t forget, if you keep this fish well-fed, the chances that it starts nibbling on the corals are considerably reduced.

Although it is not considered an aggressive fish, it is quite territorial, which means it can become aggressive towards other Butterflyfishes in its effort to protect its 'home’.

You should consider having it in a tank along with other non-aggressive species, such as angelfishes, cardinal fishes, gobies, etc. Generally, any other species that are known to be also territorial should be avoided as neighbours of your Copperband Butterflyfish.

It is a good advice to monitor its behavior quite closely during the first days. If you see it retreating repeatedly in search of a secure hiding place, this could be an indication that it has certain problems with one or more of its neighbours and you should consider removing him or the other fish from the tank.

Although they do not swim far from their corals, they love to turn and dart back and forth in a spacious aquarium. And since hiding in and coming out of crevices is another of their favorite pastimes, you should make sure that your home tank is well-furnished, too, with lots of rocks and corals.

Keeping this fish happy might make him eat up more of those pestering Aiptasias.

Why Have They Got A Bad Survival Record In Home Aquariums?

Going through these questions and answers so far, you must have began figuring it all out. Most probably it is not the record of the fish that we should question but rather that of the aquarist.

It takes an aquarist with a certain degree of experience for the survival of Copperband Butterflyfishes in home aquaria.

Right form the start I have done my best to warn you about the fact that these fishes exhibit considerable particularity. It all depends on the individual you have swirling and twisting in your tank.

Whatever its idiosyncrasies, you as a dedicated and knowledgeable aquarist, should know exactly what to do. Some fishes of this species might be easy, some others might be difficult with their food.

If your fish seems to be lazy while feeding, you need to step in by providing a wider variety of foods. Most probably, your new pet friend will acclimatize and will develop a taste for some of the food sources from the variety you have been offering.

The other details have also been mentioned already. Enough space. Good decoration and following the water-filtering and lighting guidelines are absolutely a must. The rest will simply come.

Why Do They Jump?

These fish jump when they are threatened. Their basic defence mechanism is based on their dorsal fins, which they turn towards their threat. In certain cases, depending on the position of the threat, they might move towards the surface of the water while turning their spines to the fish threatening them.

It is not uncommon to lose such fishes because of these deathly jumps. Keeping them away from aggressive fishes is the only preventive measure, according to saltwatersmarts.

Can They Get Damaged While They Are Shipped And Handled?

Quite often these fishes suffer serious injury in the process of collection and shipping. When considering buying such a fish, you should make sure that you have selected an individual that has no signs of mishandling.

Such signs would be bruises on their skin, or dark spots in other words, which would indicate that there has been internal bleeding, lumps that may have been caused by violent hits and strikes during collection and shipping.

Let us not forget that after all, a Copperband Butterflyfish is a delicate creature with a very slender body that is protected by a very thin layer of muscle and it can get injured quite easily.

A fish of this kind with internal bleeding is not expected to survive. Sooner or later it will succumb to it. This can only underscore further the importance of choosing a healthy fish at the pet shop, which is not so difficult.

You must look for the one that keeps eating as if it was its last day in the ocean. A healthy Copperband Butterflyfish that has been collected and handled without suffering any injury should exhibit an endless interest in its food. It should be in a perpetual search for food in the holes and crevices of its corals.

The Copperband Butterflyfish is quite an interesting fish. You now know if they are reef safe or not, their behaviour, why they jump, their natural habitat, their best diet and more. I hope this article has been of value to you.

Is a Pipefish a Vertebrate? The Complete Guide and Facts

Hey, thanks for passing by, welcome to the blog for Pet Fish fans. This is me, Wayne, and my son Theo. I started this journey after we bought him hist first Fish Tank of fish. Follow my site for my research and info on Pet Fish.

Hey, thanks for passing by, welcome to the blog for  Pet Fish fans. This is me, Wayne, and my son Theo.

I started this journey after we bought him hist first Fish Tank of fish. Follow my site for my research and info on Pet Fish.