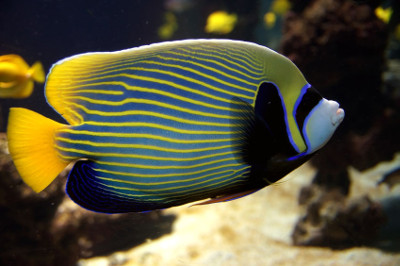 So, are Emperor Angelfish aggressive?

That's mostly what you're here for, right? Anyway, Emperor Angelfish mostly hangout in trios or "harems" of one male to two females or more, in pairs and singly when in the wild. This can tell you a bit about their temperament.

They are generally semi-aggressive fish. In the aquarium they can be peaceful, however, there are most likely to show aggression towards other larger Angelfish species or other Imperial fish (their own kind).

They will also occasionally harass other smaller fish in the aquarium such as blennies, clownfish and gobies.

In the aquarium trade, the type of Angelfish that is most commonly recognized is probably the Emperor Angelfish, according to ​fishkeepingworld. This fish is also known as the Imperial or Imperator Angelfish in certain parts of the globe.

It is both vibrantly colored and graceful and is often times held as the crown jewel in any tank or aquarium it finds itself inside. Even though they are rather hardy, experienced fish keepers are the ones advised to keep this type of fish due to the strict water parameters and tank size requirements involved.

Also, whilst the Emperor Angelfish is very popular and well recognized, unfortunately, it comes with a considerably high price tag.

This type of fish is among the most beautiful and striking saltwater fish on the planet. The Indo Pacific Ocean is where it is most commonly found and it's a member of the Pomacanthidae family.

The year 1787 is when this fish was first identified, and it was then the scientific name, Pomacanthus Imperator, was assigned to it, according to ​animal-world.

When in captivity, the Imperial Angelfish can live up to twenty years or so, however, in the wild, they can live much longer than that.

What Is The Appearance Of This Angelfish?

This Angelfish has three different stages of transformation. These are; the juvenile stage, the sub-adult stage and finally, the full-grown adult stage.

The fish's appearance drastically changes in each one of these stages. Adults and juveniles both have patterns and colorations that are strikingly different.

In fact, the juvenile, up until 1933, was called the Pomacanthus Nicobariensis and was believed to be part of a whole other species, according to ​animal-world.

The juvenile's body is black with white and light blue lines running across their face. Three white curved bands that are relatively wide make up the composition of the whole body.

The sub-adult looks a lot like the juvenile, but, upon closer investigation, you'll notice the start of a yellow patterning developing across the tail fin alongside yellow vertical lines all across their entire body. Their bodies will also become rounder and deeper.

Once the fish has fully developed into a mature adult, their bodies are deep boiled with blue and yellow stripes which are horizontally stretched from the yellow tail fin to the gill area.

A white edging is formed on the dorsal fin. Across its eyes, you'll find a black band that is mask-like and it contains a blue trim. The snout and mouth are white.

These changes normally occur over a time frame of about two years, when three to five inches is what the fish measures in length. In captivity, however, the color changes are usually delayed.

The Imperator Angelfish species is a deep bodied fish that can grow up to around forty centimeters or sixteen inches in length when living in the wild.

But, in captivity, they grow to be considerably shorter than their counterparts in the wild and measure a maximum of around thirty centimeters or twelve inches long. The average lifespan of this fish that descends from the Pomacanthus genus, whether in captivity or in the wild, is around twenty-one years.

Do You Need Quality Water For Them?

Keeping this type of fish is usually a difficult endeavour. The Emperor Angelfish requires excellent water quality to stay healthy and that's why they're typically considered very hard to keep and maintain.

This is basically why only experienced aquarists are advised to keep them. Not only does this fish require exceptional water quality, they also need a rather large tank that has numerous caves in it.

Obtaining them when they are around four to six inches long is the best size when you want to adjust them to life in captivity.

What Do They Eat?

How and what they eat generally depends on how old they are. When they're first introduced, some of them might refuse to eat. This largely why an established aquarium is preferable.

An established tank allows them the opportunity to fend for themselves whilst they acclimatise. During the first weeks of their introduction, try to feed them often but with little amounts of food. Do this around five times per day.

The Emperor Angelfish is an omnivore, which means they eat both plants and meat. They require spongy material, meaty foods and plant matter in order for them to have a balanced diet.

Replicating the diet they follow in the wild can be extremely difficult because out there they have access to a large variety of small organisms and sponges such as hydroids, tunicates, bryozoans as well as tiny amounts of algae. It would be both expensive and difficult to keep on replenishing your aquarium with enough sponges.

You should, therefore, feed your Imperial Angelfish a diet that consists of plenty of frozen or live foods, algae, spirulina and formula foods. They will also accept meaty foods such as shrimp, scallop and chopped squid as well as vegetable-based foods. You can also prepare your own fish food at home if you want to make sure your Angelfish gets the best possible diet. The food you make can consist of a blend of spinach, shrimp, squid and mussels.

Once the fish has acclimatized to aquarium life, you can slightly add the quantity of food you've been feeding it and feed it around three times per day instead of the initial five. Always remember to remove any fish food that it hasn't eaten after five minutes so as to ensure the water quality remains optimal.

Emperor Angelfish mostly come from the Indo-Pacific Ocean reef areas. Juveniles hangout in rockwork found around the reef's outer edges and are usually loners whereas sub-adults roam further out into the surge channels of the front holes of the reef.

However, they both act as cleaner fish. A mature adult can be found roaming in seaward reefs, channels and clear lagoon areas with rich coral growth. Males are very territorial and usually require large territories, which they can sometimes share with 2 or more females.

When it comes to matters concerning tank conditions, it's always good to try as much as you can to replicate the fish's natural environment and habitat into the aquarium.

These rocks will also act as hiding spots which will in turn help make your Imperial Angelfish feel a little secure. The tank's temperature should be kept between twenty-two to twenty-seven degrees Celsius or seventy-two to eighty-two degrees Fahrenheit with an 8.1-8.4 pH level.

Most aquarists believe that when these fish are kept in captivity their colors are not as bright as those of their counterparts in the wild. However, that may not be the case if you provide your aquarium with a lot of light.

Lateral and Head Line Erosion Disease can also be prevented by sufficient aquarium lighting. Also, this type of fish is prone to getting sick pretty easily, so you must always ensure that water conditions in the tank stay optimal. This can be ensured by changing the water regularly.

Can You Mix The Emperor Angelfish With Other Fish?

As we mentioned earlier, the Emperor Angelfish is generally a semi-aggressive fish. So you may have other fish, such as Green Chromis, and wondering if you can mix them. However, you need to understand, they can get very aggressive, especially toward other Angelfish that are of a similar size and shape.

It's possible to keep the Imperial among other Angelfish, but, you must ensure that they don't look too much alike. Juvenile Emperor Angelfish should always be introduced into the fish tank or aquarium last.

This is largely due to the fact that it will help reduce any territorial behavior the Imperial might have. Avoid placing them amongst small peaceful fish because they are most likely going to harass those fish.

They'll usually coexist with most of the other big saltwater fish so long as they aren't similar in size and shape.

You should try to avoid placing them amongst fish that is small enough to get eaten by them. Remember, these fish are omnivores. They eat both meat and vegetative matter.

They are usually shy, in the beginning, when you first introduce them to the fish tank, but after a while, they'll acclimatise and begin to become very active. They love to get up and about once they've become completely comfortable with their environment and other fish.

Is Breeding These Fish Hard?

At the moment, you can't breed the Emperor Angelfish in captivity. There's no record of any successful tank raising endeavor. Only a very gigantic display aquarium is what is capable of successfully breeding this type of fish. Rarely will you find home aquarists having fish tanks big enough to support Angelfish spawning.

The difference between a male and a female Imperial Angelfish is, the blue coloring found across the eye mask of the fish is more of a deep blue in males while in females it's more of a grayish blue.

The male and female spawn only once a year, however, those that call Marshal Island home spawn twice. In August as well as September. Males are known to have two or more females with them and each of them is designated their own territory.

These types of fish are easily prone to stress and usually don't ship well. So, before you acquire one, you should ensure that the one your getting is in the healthiest condition possible.

Ideally, when you're selecting one, try and get a juvenile that measures around four to six inches in length because those that have grown to this size normally find it easier to integrate into captivity. Ensure that they're curious and active about their new environment.

Make a gill count check. If they're swimming calmly and it's over eighty then this should alarm you. Another red flag is when they appear disoriented and overly bright. This might be a sign that they've been exposed and treated with cyanide. If you find that their color isn't as bright as an Emperor's in the wild would be, adding color enhancers to their food will improve as well as enhance their color.

All in all, if what you want your saltwater aquarium to have is a beautifully patterned and vibrant fish then there's no better option than the Emperor Angelfish. It would make the ideal addition.

As I explained earlier, they are a bit agressive, but at least you know this now, upfront.

In summary, the only downside to owning and keeping this fish is that it takes an experienced aquarist to successfully do it. It's not for the amateur fish tank keeper.

Keeping the water conditions optimal is hard enough for the seasoned aquarist let alone the beginner. Other than that, it's generally a wonderful addition to any saltwater fish tank. Definitely a crown jewel of aquarium fish.

Is a Pipefish a Vertebrate? The Complete Guide and Facts

Hey, thanks for passing by, welcome to the blog for Pet Fish fans. This is me, Wayne, and my son Theo. I started this journey after we bought him hist first Fish Tank of fish. Follow my site for my research and info on Pet Fish.

Hey, thanks for passing by, welcome to the blog for  Pet Fish fans. This is me, Wayne, and my son Theo.

I started this journey after we bought him hist first Fish Tank of fish. Follow my site for my research and info on Pet Fish.